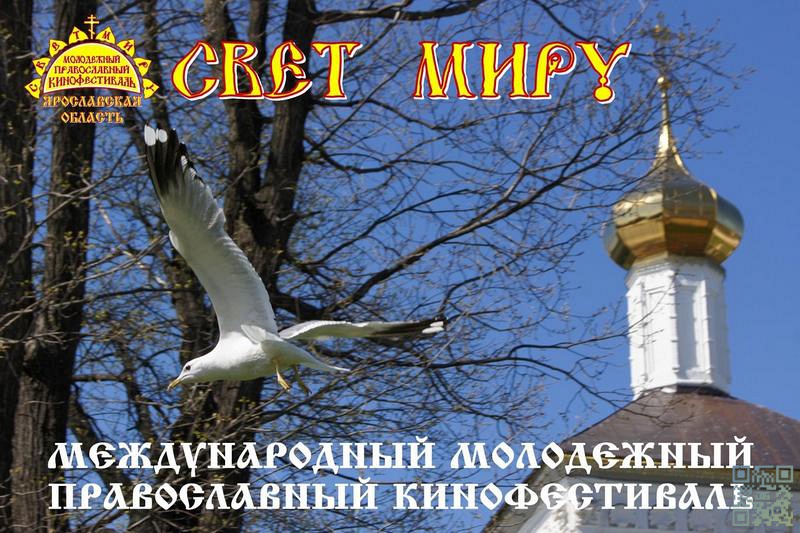 POSITION about the Tenth anniversary international youth film festival » Light to the world»,

dedicated to the 275th anniversary of the birth of the Russian naval commander, Admiral F. F. Ushakov.

«I am the light of the world; whoever follows Me will not be walk in darkness, but will have the light of life «(Jn. 8: 12)

— provide methodological and practical assistance to specialists working in the field of children’s and youth film-making, as well as education and upbringing of children and youth;

The Festival is co-organized by the Rybinsk diocese of the Yaroslavl Metropolitan of the Russian Orthodox Church and the national Fund for support of copyright holders (Moscow).

The festival is held with the support of the administration of the Yaroslavl region and its subjects, state, commercial and public structures, as well as the media.

Professionals and film enthusiasts are invited to participate by category:

A movie can only fall into the category if at least one of the following conditions is met:

5.2 «Light to the world» Category: youth groups and individual authors.

A movie can only fall into the category if at least one of the following conditions is met:

The nomination is opened with a sufficient number of submitted applications. In the case of a small number of applications, films are shown out of competition.

6.1 Applications for participation are accepted from January 1 to March 1, 2020 in the prescribed form on the festival website:

6.4 final of the festival: from 13 to 16 may 2020. Participants will visit Yaroslavl, Rybinsk, Uglich, Tutaev (subject to change). Screenings of competitive films will be held in other cities of the Yaroslavl region.

The program of the final includes viewing of finalist films, discussion of works, master classes, a round table for teachers and heads of film studios, excursions. The festival will include concerts and creative meetings with famous cultural figures.

7.1 Applications and films must be received by the organizing Committee no later than March 1, 2020.!

7.2 films and programs created not earlier than 2017 are accepted for participation in the competition program of the festival. The working language of the Festival is Russian. Programs (films) created in a foreign language must have subtitles in Russian or simultaneous translation. As an exception, the organizing Committee can accept a film with subtitles in English.

7.3 Movies are accepted via file sharing in AVCHD, AVI, MOV, MPEG-2 or MPEG-4 format. HD movies are welcome. The link to the films must be up to date until the end of the final of the festival.

7.5 do not accept works that advertise the activities of totalitarian, occult, satanic and any other destructive sects, psychics, magicians, sorcerers, healers, etc. List of the most famous sects and cults: http://iriney.ru/alfavitnyij-spisok.html#

7.6 the international youth film festival «Light to the world» is held in two stages: the selection of the best video works (in absentia) and the final. A Selection Committee is created to pass the works to the final part of the competition. The selection Committee makes a preliminary selection, as a result of which films of high technical and artistic level that meet the goals and objectives of the Festival are passed to the final. Films that have passed to the final are evaluated by the Jury of the film festival.

7.7 Authors of films that have passed the final of the Festival are invited to the final events of the Festival, which will be held on may 13-16, 2020 in the Yaroslavl region (Rybinsk, Uglich, Tutaev, Yaroslavl).

7.8 Films are rated on a 5-point system (from 0 to 5). Films that have received an average rating of 3.5 to 5 points, become winners of the festival and are awarded diplomas of the 1st, 2nd and 3rd degree. The other finalists receive incentive diplomas.

Special festival prizes: members of the jury and sponsors can award their favorite films for acting, directing or camerawork, for the idea, etc.

The best films are determined and awarded according to the children’s and youth jury.

9. Competition nominations and timekeeping of works.

The timing of the competition works is not limited, but in the selection of preference is given to films and programs lasting up to 30 minutes.

9.2 III regional photo contest «Yaroslavl region through the eyes of children» (a separate provision on the photo contest — in Annex 2).

The jury consists of:

11.1 Participation in the Festival competition is free of charge. The travel of the finalists to the festival and back – at the expense of the participants. Accommodation, meals and cultural and excursion program are paid by the organizers of the festival (if there is sufficient funding).

Sending invitations begins with the participants who have scored the maximum score, if they refuse-after a 5-day period-the place goes to the next finalist in the evaluation system.

11.2.  In case of refusal of the finalist from full-time participation in the Festival, he receives an electronic diploma, the prize and the original diploma is not sent.

11.3 conditions of arrival at your own expense.

The program of the festival specifies the places of food, lodging, and screenings. You can book your own hotel, pay for meals and travel between the festival cities. All details of this option of participation can be clarified with the members of the organizing Committee in the social networks «in contact», «Facebook».

«Light to the world»:

«Light to the world. Children»:

Group of the festival «Vkontakte»: http://vk.com/svetmiru2013